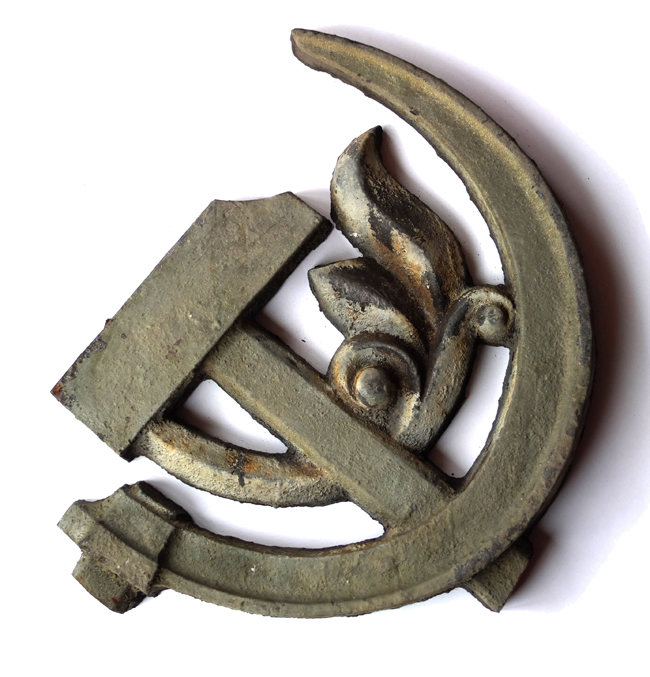 One of the removed symbols after the law banning of 'Soviet' symbols.

New Georgia: Change of Symbols after the fall of the Soviet Union

The present newspaper is result of a workshop held in Tbilisi in February 2014 with the aim in critically reflecting the recent and current politics toward symbols in Georgia.

Target of our focus was on one hand the State’s official relation to the past symbols and with that to history, and on another, what kind of symbols the contemporary politics produce. While preparing this publication the controversial Freedom Charter which was set in 2011, is about to come into action. The ban of Soviet symbols is an attempt to erase a major part of 20th Century history in Georgia. But we understand that with removal of past symbols only little is actually done to mend problems in society that are much more concrete than that. Also, the mere removal of the unwanted symbols is challenging the rethinking process of the recent history, and can even be hindrance to understanding the past.

Along with erasure of one history, another is remembered and celebrated by lifting out of oblivion mythical figures such as Prometheus or Saint George. The symbols that the current politics prefers, although not easily recognizable and obvious, are nevertheless highly propagating. They are made of glass, gold and corporate logos. They speak of transparency, economic prosperity, geopolitical orientation, and the holy words of the spiritual leader.

In the workshop we got possession of a large hammer and sickle decoration, which had been discarded from public view due to the ban of Soviet symbols. This heavy piece of cast iron had already become extinct as doomed illegal.

The symbol was starting point for each of our individual reflections on the theme that resulted in this compilation of contributions. We had a vast topic and restricted amount of time. Nevertheless we hope that the reader will get some new input into the complicated issue of symbols and politics from the pages of this newspaper.

We think that by looking at history, and especially what is being told of it, and how, the true politics of today are revealed.