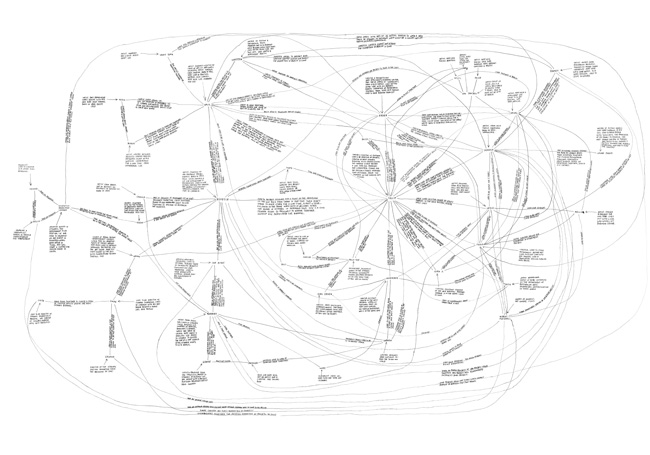 Istanbul Map is the first in the series of five maps that I have made of connections and dynamics in contemporary art scenes. I made the map while on artist-residency at Platform-Garanti Contemporary Art Center, Istanbul. I had been in Istanbul before in 2003 hosted by Sea Elephant Travel Agency in Loft-space run by late artist Huseyin Alptekin. Then it happened that those months, which I was staying in the city, for some unknown reason, Alptekin was not in friendly relations with the Turkish curator Vasif Kortun. This reflected on the whole art scene and most of the people whom I met were forced to define their position in relation to this situation. I was also given side in the camp of Alptekin, although I also knew Kortun from before. This temporary disagreement between these two protagonists in the contemporary art scene of Istanbul, which happened on a completely personal basis, or at least no professional statements or demands were announced, had a big momentary impact on the confused and vulnerable, those days still very small and inter-connected art scene.

This, and some other similar conflicts in the art scene of Istanbul, where personal and professional relations were difficult to distinguish, but which had an impact on the local contemporary art field at large, made me think that this phenomenon is unique and characteristic of the Istanbul art scene. At that time, having recently graduated from the Helsinki art academy, the art scene in Helsinki, because highly institutionalized, appeared to me as only professional and I naively thought that this could not happen in Helsinki.

The first map thus came out as a portrait of Istanbul, from the point of view of professional-personal dynamics in the contemporary art scene. Unlike in the maps to follow, on that one I only included people, whom I had acquaintance with. Thus, it can be understood as a way to perceive the art scene along with its complicated relations, or as Sureyyya Evren writes in his article ”A Reflection of an Istanbul Art Scene: On Minna Henriksson’s ’Istanbul Art Scene Map’”, a way to become part of it. Furthermore, I thought that the map of Istanbul is a tool and a prototype, which could be used as an example by anyone to making such researches of other art scenes, or any other interlinked communities, an aid in recognizing hidden power structures, hierarchies and corruption. I thought that I would not need to repeat the form myself by making more maps.

It is obvious that these maps do not give an accurate image of the art scene, which they claim they are representing. That is already because they are only describing that brief time which I have been visitor in these cities, and tell about the issues spoken in them at that moment. Another reason is that I was not using scientific methods or relying on any textual source, but my sole material was what people, whom I got into conversation with, chose to tell me, this of course was then filtered through my perception and memory. Also, we cannot deny that the institution, which was hosting me, surely had an influence on what I heard and whom I met, although I was quite self-sufficient in navigating in these scenes. But these maps are made with a clear awareness that they are not even trying to be accurate and factual, and because of that it is possible there to exist many cases of two or more contradictory pieces of information within the same diagram. Through reproducing all the complaints, interpretations, gossips and suspicions, they are describing a phenomenon of the existence of such a gossips-driven discourse in these contemporary art scenes, which has a major impact on the professional productions coming to the public view from these scenes.