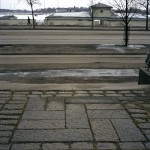 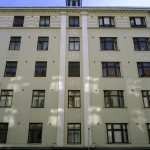 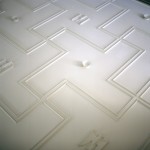 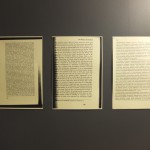 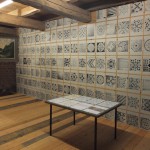 Hidden is a study of concealed fascism in the history of Finland. The starting point was a painting that I inherited. In the installation the topic is especially examined through swastika-symbol.

Parts of the installation:

Photograph of the war memorial next to Inari Sami church, erected in 1958. In the memorial stone is carved: ‘Kodin, uskonnon ja isänmaan ja puolesta’ (For home, religion and father’s land). Thank you to Marja Viitahuhta for the hint.

Photo series of swastikas in the architecture of Helsinki. The pictures are of my random observations and there are probably many more. Thank you also to Diego Bruno, Joakim Pusenius and Lionel Clerc for hints.

Page from Wilhelm Reich’s work Mass Psychology of Fascism (1933, third corrected and extended edition), in original German language, in English and translated from English into Finnish. The Finnish translation is by Erkki Puranen from 1982, published by Otava in Helsinki.

Landscape painting by E. Janatuinen from 1949, which I inherited from my grandmother a few years ago. When I took the painting off the wall I discovered the big Nazi stamp behind it.

Crossword puzzles from the weekly Suomen Kuvalehti between the years 1939 and 1944, scanned from the microfilms and presented as A4 size prints in chronological order.

Correspondence about my request to photograph the Aino-triptych (1889) by Akseli Gallén-Kallela, that is in the collections of the Bank of Finland.

The installation is extended from the exhibition Hidden in Bergman Galleri, Helsinki in 2012