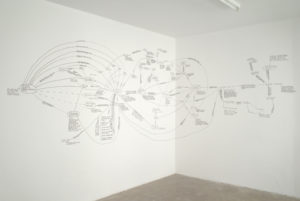 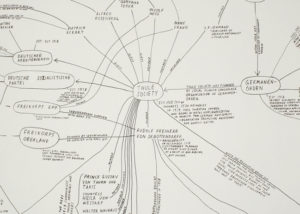 Völkisch and Elitist Roots of Nazism

The diagram deals with racist ultra-nationalist groups that were influential in Munich before the establishment of the Nazi Party, and which had an impact on what was to become of it. The aim has been to observe the relation of power, capital and elite social status to racism and anticommunism, informed by völkisch esoteric knowledge and Germanic pagan heritage.

It is widely acknowledged that Munich played an important role in the early years of the Nazi movement. One aspect of this is the salon of Elsa and Hugo Bruckmann at Karolinenplatz No. 5 in Munich, where young Hitler first encountered a wealthy German elite and received tutoring in etiquette. Another famous aspect is that Munich was the site of the Beer Hall Putsch in 1923. Also the Nazi Party (NSDAP) had been founded in Munich in 1920, where its headquarters stayed until the dissolving of the party in 1945. A formerly local, insignificant antisemitic newspaper Münchener Beobachter that had been published in the eastern suburb of Munich since 1868, became the main organ of the Nazi propaganda in 1920, renamed as Völkischer Beobachter with circulation of 1,7 million copies in its heyday. Also the counter-revolutionary paramilitary activism in response to the Bavarian Soviet Republic united many who were later on to become central figures in the NSDAP.

This history about the Nazi movement and the NSDAP is well researched and recorded. Also every step of Hitler is meticulously followed and analysed, as no doubt it should be. But in this history writing Hitler becomes too easily the sole source of evil, who invented the whole Nazi ideology alone and out of the blue. Ironically, this is what Hitler would have himself wanted, as he tried to erase traces of movements in the roots of Nazism, and to present himself as a superhuman, who came up with the Nazi programme all by himself. Indeed, what has been been left with less scrutiny and unclear are the ideological roots of Nazism. These can be found in various secret societies, where elite positions and wealth met with theories of Aryan race superiority, antisemitism and occultism. They had an influence on Nazism, but the Nazi movement was just one outcome of them.

It is good also to acknowledge that although the Nazi movement was born largely out of the paramilitary freikorps and the groups opposing to the Bavarian Red Republic, by no means did the revolutionary uprising give birth to Nazism, which would have not emerged otherwise. These antisemite ariosophical groups were already formed long before, gathering in secret, but they found a reason to mobilise and disseminate their agenda among the working class as part of the counterrevolutionary activism.

Sources used in defining the historical context of the project: