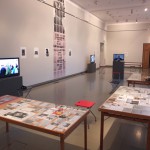 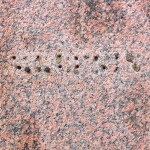 The exhibition takes as its point of departure the monument of V. I. Lenin (by Mihail Anicushin) in Aurakatu no. 15, in front of the Art Museum in Turku. The monument has been much debated ever since its erection in 1977, and from time to time even sabotaged. Along with this monument, the exhibition addresses local issues regarding public monuments and Lenin-memorials in Finland.

The exhibition presents information, views and opinions about issues relating to the monument from various aspects. Such issues are: anti-Russian sentiments in Finland in history and in present day; anti-communism and support of fascism as its opposite; paralleling Lenin with Stalin and also with Hitler; political manifestations in today’s public art, not necessarily in the subject matter but for example in the policy of erecting statues for the financial benefit and prestige of private entrepreneurs; understanding as political (and thus disturbing) that what is in conflict with today’s political climate, but not recognizing also as politically charged the many nationalistic and Whites-glorifying monuments.

Concretely, the exhibition is presenting various kind of information, historical and actual, official as well as interpretations and opinions. The historical period connected to the monument is December 1907 when Lenin passed through Turku on his escape route via Stockholm to Europe, during which he jumped off a moving train 20 km prior to Turku, and some days later risked his life on thin ice of the Turku archipelago. Also the exhibition is discussing the role of Lenin in independency process of Finland, and the period in Finnish foreign politics called ‘Finlandization’ that perhaps explains the erection of the monument in relatively conservative city of Turku in 1977. The exhibition is also presenting information of other existing, planned, and destroyed Lenin-memorials in Finland, as well as opinions-letters for and against remembering Lenin in Finland. The campaign of erecting statue of Lenin in Helsinki is explained by the initiators of the campaign. Policy of public artworks in the city of Turku is discussed, as well as the vandalism that the Lenin-monument has been target of in the past years, both from unknown vandals and from student groups. The vegetation plans around the statue, and the solution to hide it with overgrown trees, are also considered from different viewpoints.

The exhibition is overwhelming for the viewer due to the amount of information that it contains. The aim is to bring visible the different topics that find materialization in the monument, and furthermore, to find in the bottom of all of them the underlying threat to today’s political climate in the issues that the statue represents.