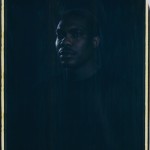 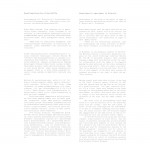 Sensitometry is the study of the effect of light on light-sensitive materials developed in the 1890s by F. Hurter and V. Driffield.

Kodwo Eshun argues that the white skin has set the standard for film, film as such is not neutral, and that, depicting mechanisms of racialization, one has to intervene with the whole field of what is called sensitometry; the sensitivity of light to skin. Eshun states:

“These are not identitarian questions, they are technological and formal questions of embodiment whose resonance is political and spatial.”

In Helsinki, in the newspaper archives of the Finnish National Library a persistent malfunction appears in the latest-technology brand-new Minolta MS 7000 MK II microfilm scanners: when scanning newspaper image with dark skinned person the scanner automatically turns the image to its negative making the skin white and all the other information reversed along with it. This is a small occurrence, that can be manually corrected each time, but a clear example of the white skin setting the standard according to the logic of which the machine operates.

Having a model with black skin in front of the lens of the 20×24” Polaroid camera, Polacolor P3 (ER) film was exposed with 600 mm lens at 44” bellows, w/15 green filtration, .022” gap, effective ISO 8, f11 5/6 @ 1/125s. These were defined as the ideal settings for photographing white skin in the studio environment. As result, with black skin the density change of the film material barely exceeds the threshold of the film, and the image remains too dark.

The usual trick in photographing black skin would be to open the aperture one or two additional stops from the ‘normal’. This was left undone, in hopes, in the very technology and the film medium, to be able to illuminate something entirely different; the racial politics that the Polaroid Company was engaged with at the same period of time as introducing the rare and exclusive 20×24” camera:

In 1970 the Polaroid Corporation was the first company, doing business in South Africa, that was target of extensive international protest movement and boycotting with demands to stop selling the ID-2 system to the state of South Africa. The ID-2 system was used for documentation purposes in the infamous passbook – essential tool for control of the Apartheid, and obligatory for any African to carry with them at all times. Finally, in 1976, the company terminated its business ties with the state of South Africa as result of continuous pressure from the protesters, particularly from the Polaroid Revolutionary Workers Movement.