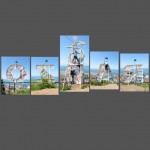 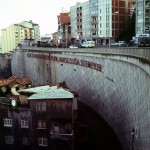 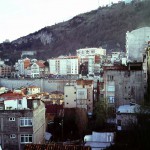 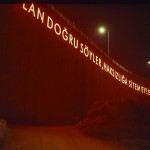 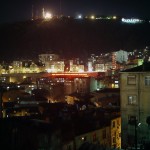 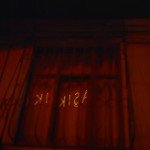 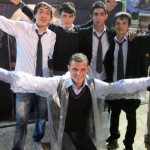 I was commissioned by the British Council Istanbul to propose a work in the public space of a Turkish city. The city, which was appointed to me was Trabzon by the Eastern Black Sea coast.

The work got started from an observation that Trabzon is has a bad reputation elsewhere in Turkey connected with nationalism due to violent extremist attacks. I wanted to deal with the problem of nationalism by offering young people the possibility to decide for themselves what kind of an image of Trabzon they want to be distrib­uted rather than end up reproducing the negative stereotype.

The main parts of the work are a publication and a light installation. Also as part of the process a music group was formed, who gave a performance in the opening of the project in Trabzon, and an exhibition of selection of the material was mounted in vacant shop spaces of commercial center Sukurhane in the lively green market area of the city, which people of all social status use daily.

The publication tells about the city of Trabzon in a different way than the usual and official city books. Most of the contributions have been produced by young people from Trabzon and the material has been discussed and worked on in a series of workshop meetings during the spring and summer 2010. The participants have them­selves chosen the areas or the issues to be covered according to their interest. Other areas have been left out. Cliché representations of the city were questioned, and when possible, have been avoided, and instead the focus is on per­sonal experiences and real concerns.

The light installation is a sentence, which is taken from the lyrics of song BEN GEÇERİM, GÖNÜL GEÇMEZ by forgotten 70s’ progressive rock-group Üc Hürel originating from Trabzon. The sentence: ‘Aşık olan, doğru söy­ler. Haksızlığa sitem eyler’ (in English: the one who is in love speaks the truth, and complains about injustice) is placed in the side of the motorway wall of Yavuz Selim Bulevard above the Çömlekci-area, and it is visible from many central locations in the city and from the harbour.

The Çömlekci area will go through a complete redevelopment and upgrading in the coming years. Separated from the context of the love song by Üc Hürel, the line is encouraging people of Trabzon, and especially the cur­rent residents of the Çömlekci area, to speak out their opinion about this transformation. Also more broadly, it is speaking about positive participation in the society development and possibility for generating a change.

In the landscape of Trabzon there already existed one text prior to my intervention, which is the letters T-R-A-B-Z-O-N in the style of the Hollywood-sign on top of the Boztepe-hill over the city. My intervention in the landscape addresses this abstract city name and adds definitions to it.

The opening of the My City project in Trabzon took place in three different locations in the city center. Apart from the light installation in Çömlekci and the book launch and exhibition in the Sukurhane passage, a music group performed at the main square. The group was formed in the process of the project and its members are from the Trabzon Çocuk ve Gençlik Eğitim Merkezi. In the months prior to the opening of the project they were in­structed by Tunay Uzuner, a musician and professor in the Karadeniz Technical University department of Music education.